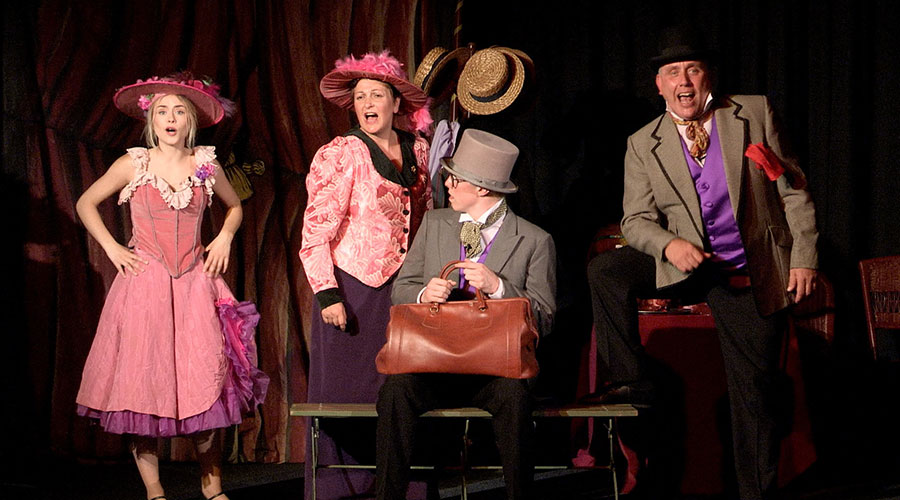 This brand new musical based on Charles Dickens’ classic brings to life the compelling story, as played by a troupe of Victorian touring actors.

The story is told in a series of scenes accompanied by the great original songs by Laurie Hornsby.

The 7 versatile actors play all the parts with the use of shawls, hats, authentic props etc, and assume their characters in full view of the audience.

Because of its design, this production can be presented in any reasonably sized indoor space. It has no need of a stage, as the actors set their own ‘suggestion ’of a stage prior to the audience being admitted, and complete the transformation in the first 32 bars of music preceeding the Opening Chorus!

The story is told with clarity and pace, and the action zips along until the triumphant finale ‘Tear Down The Curtains.’

Running time: Act 1 - 50 minutes | Act 2 - 40 minutes
This production is ideal as a Dinner/Theatre event.
Depending on the venue and its available in-house facilities, we would expect to request a 'Get In/ Fit Up' period of approximately 4 hours, as we always strive to dress our playing area to enhance the quality experience for the audience in terms of sound and lighting and with scenery appropriate to the style, period and design of each production.

Click on the heading below to read the review